Knock knock. Who’s there? Not climate.

When’s the last time you heard climate change mentioned in a TV show or a film? Can’t remember? Neither could we. That’s why we created Good Energy: to figure out if we were imagining this silence. Turns out, we weren’t!

Less than 0.56 percent of scripted TV and film released between 2016 and 2020 mention the term “climate change,” according to new research we commissioned from the USC Annenberg Norman Lear Center’s Media Impact Project.

The objective of this study was to establish a baseline for climate representation in scripted entertainment. The study analyzed scripts from 37,453 TV episodes and films that aired in the US media market, and found that only 2.8 percent of scripts from this time period mention any of the 36 major climate-adjacent words or phrases searched, including “global warming,” “climate crisis,” “sea level rise,” “solar panels,” “deforestation,” “ocean pollution,” “save the planet,” “renewable energy,” and many more.

For context, the word “dog” was mentioned almost 13 times as frequently as all 36 climate keywords combined. (We are very pro-dog, but come on.)

And while keywords aren’t the be-all and end-all of climate representation, when you’re starting from almost zero—which we are—it’s an important indicator of where we're at.

This “climate silence” in the scripted stories we watch and love feels increasingly weird. A huge majority of people in the US and around the world are worried about the climate emergency, and are already experiencing it. Four in ten Americans were hit by a climate disaster in 2021 alone! But this isn’t being validated in the stories they’re watching.

This is how Americans are feeling about the climate crisis:

And this rising concern isn’t just an American thing. A 2021 Pew Research Center poll found that 72 percent of people in 17 advanced economies spanning North America, Europe, and the Asia-Pacific region are concerned that climate change will harm them personally. Young people are particularly distressed: a 2021 Lancet survey that polled 16–25-year-olds on their feelings about the climate crisis found that more than 50 percent felt sad, anxious, angry, powerless, helpless, and guilty when contemplating the future.

In 2019, Greta Thunberg was Googled more than Beyoncé.

But this increasing worry isn’t reflected on-screen. Which leaves audiences feeling like they’re more concerned about the climate crisis than the fictional characters they watch, according to the research we commissioned from USC.

“Climate silence” in TV and film leads to silence in our lives: despite overwhelming and growing concern, more than three in five Americans say they “rarely” or “never” discuss global warming with family and friends, leading people to feel anxious and alone. Searches for “climate anxiety” soared 565 percent in 2021 (not to mention the eye-watering 4,290 percent increase in use of the word “eco-anxiety” in 2019), yet our research found that the phrase “climate anxiety” was not mentioned ONCE in the scripts we analyzed. (But hats off to the writers who brought us a climate-induced panic attack in HBO’s Big Little Lies.)

The climate emergency isn’t going away, and we can’t tell stories that are relatable to audiences if we’re ignoring the biggest story in our world.

The good news is the industry has the power to change this cycle of silence.

And in case there’s any lingering worry that climate stories won’t appeal to audiences: in one of the extremely rare examples of a movie that allegorically but strongly tackles climate, Adam McKay’s Don’t Look Up recorded the biggest week of views in Netflix history.

Clearly, there’s a fast-growing audience for these stories—but there are still way too few of them. Let’s change that together. 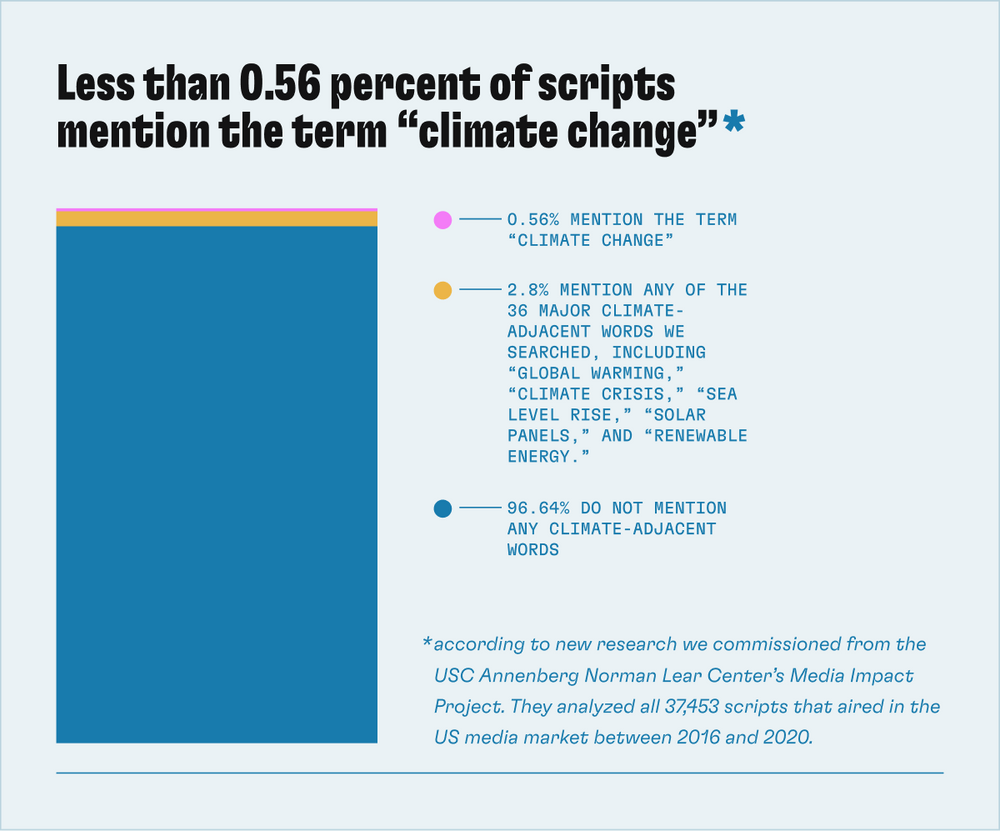 If facts and data were going to save us,  we would’ve fixed this shit long ago.