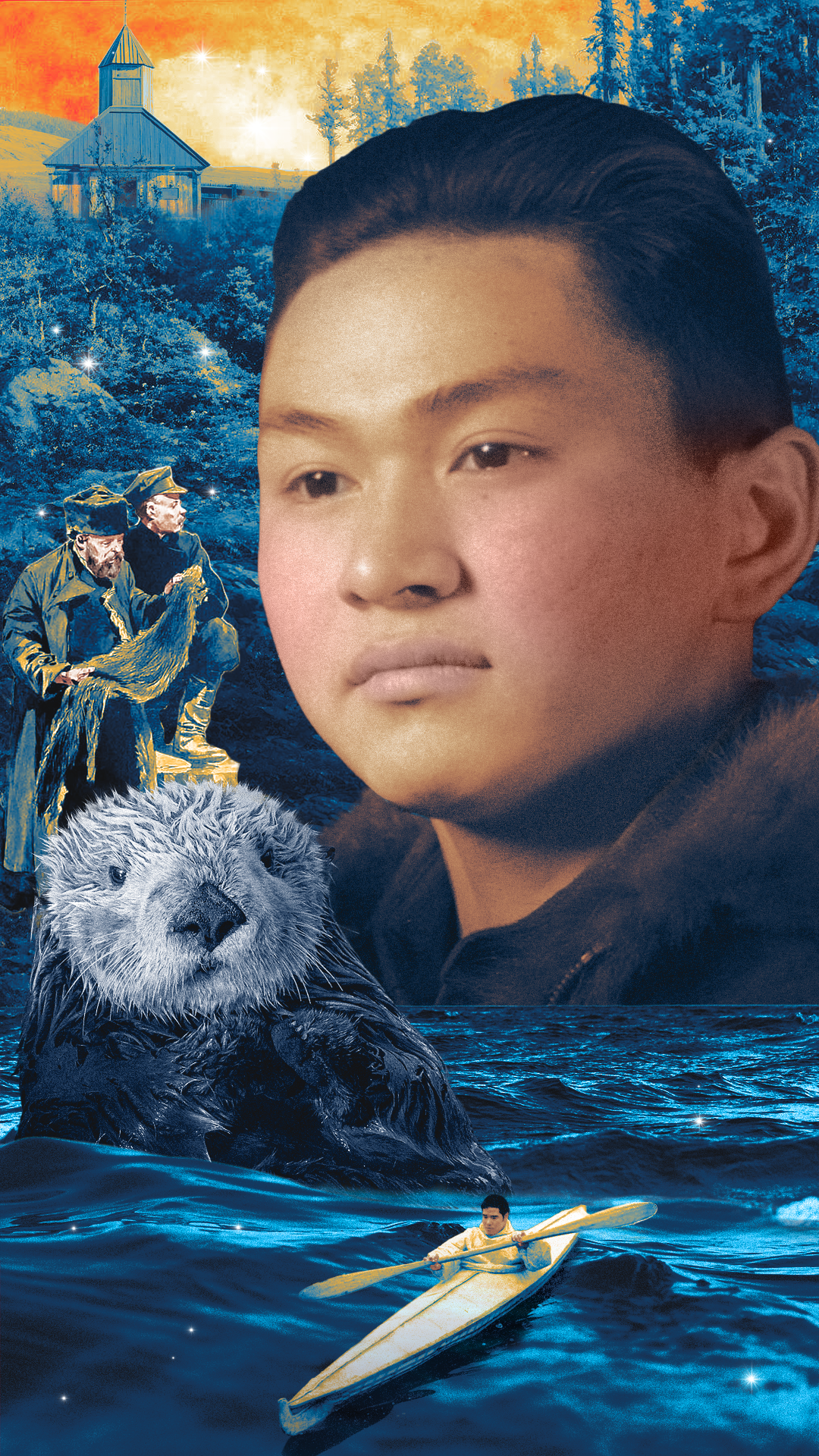 The otters have always lived off the coast of Sam’s village. He grew up watching their sleek bodies twist through dark Alaskan water, flickering and twisting beneath the sea ice, daydreaming about how warm that fur must be in the frigid sea. Sam spends hours floating in his kayak and watching the otters, especially one young otter who seems to like to follow him. Sam pretends he doesn’t notice, hoping Otter will stay near.

Lately, though, he’s been spending more and more time in the water. The ice is melting earlier every year, forcing him and his family to watch their village and way of life disappear. The only times he doesn’t feel totally hopeless are when he’s on the sea, cutting through the waves in his kayak.

Human has been there ever since Otter was born. His mother cautions him not to go near humans: they are violent creatures who can’t be trusted. But Otter likes Human, the young boy with big eyes. Sometimes he secretly follows along under Human’s kayak, in the underdark, his second shadow.

One night, Sam takes the kayak out for a midnight paddle. He can’t sleep. He’s too anxious and scared. His family is going to have to move to Anchorage so his mom can work. He’s never been to a city before. How can he leave the village? Lost in his thoughts, he doesn’t notice the current strengthening—

Otter wakes to yelling. He looks around, recognizes a shape: Human is out in his kayak, but something is wrong. Otter slips through the water to get closer, and is pulled fast by an eddy. He and Human spiral into blackness. Otter and Human lock eyes, both afraid, just as—

Behind Sam, angry voices shout. Disoriented, he peers through the dark mist. The eddy has stopped, the water is still. The voice comes again, louder, angrier, in a language he doesn’t know. He’s surrounded by a group of men, Alaskan Natives like himself, but he’s never seen them before. Their clothes are weird, like antiques from his grandpa’s pine chest. There are other men with guns that Sam has only seen on TV, old-timey muskets, and they speak in what he guesses is Russian. A Native man asks him where his harpoon (atlatl) is, and says to keep close as they travel south or he’ll get in trouble. Sam is confused, scared, but Otter is right there with him, under the boat, unseen by the others.

On their long journey, he learns from the others that they were stolen from their villages by Russians, who didn’t know how to hunt the otters. They tried to tell the Russians that they had a relationship with the animals, that they must not disrupt this understanding by killing more than they needed. But the invaders threatened them: if they didn’t do it, they would hurt their families. Up and down the coast, the Indigenous men are forced to hunt otters. “Soft gold,” the Russians call the pelts.

The sea glitters red, full of blood. The smell of slaughter reaches them. Otter and Sam realize: this is not their time, but more than a century ago. How do they get back?

Finally they arrive at Fort Ross, an otter-fur trading post off the Northwestern coast, made up of Californian and Alaskan Indigenous people. This is what Otter's mother warned him about—the times when the humans hunted otters to near extinction. Otter panics and tries to swim away, but gets tangled in netting and hauled to land.

The Russian men give Sam weapons and tell him to kill Otter. When he says no, they beat him. Otter squirms and slips out of his bonds, scuttling to his Human, and even as the blows fall harder, Sam wraps his arms around Otter, the bond between them generations old, deep in their bodies. They close their eyes—

Sam wakes up in the hospital near modern-day Fort Ross. A nurse tells him he was found floating in a kayak, unconscious. Sam looks out the window and sees a small brown animal twisting in the waves. He decides to hold a ceremony—a reconciliation ceremony where he can reach his arms out toward Otter and say: We are sorry for the harm we have caused, we are sorry, we are sorry.

A politician building a wind farm and his assigned angel